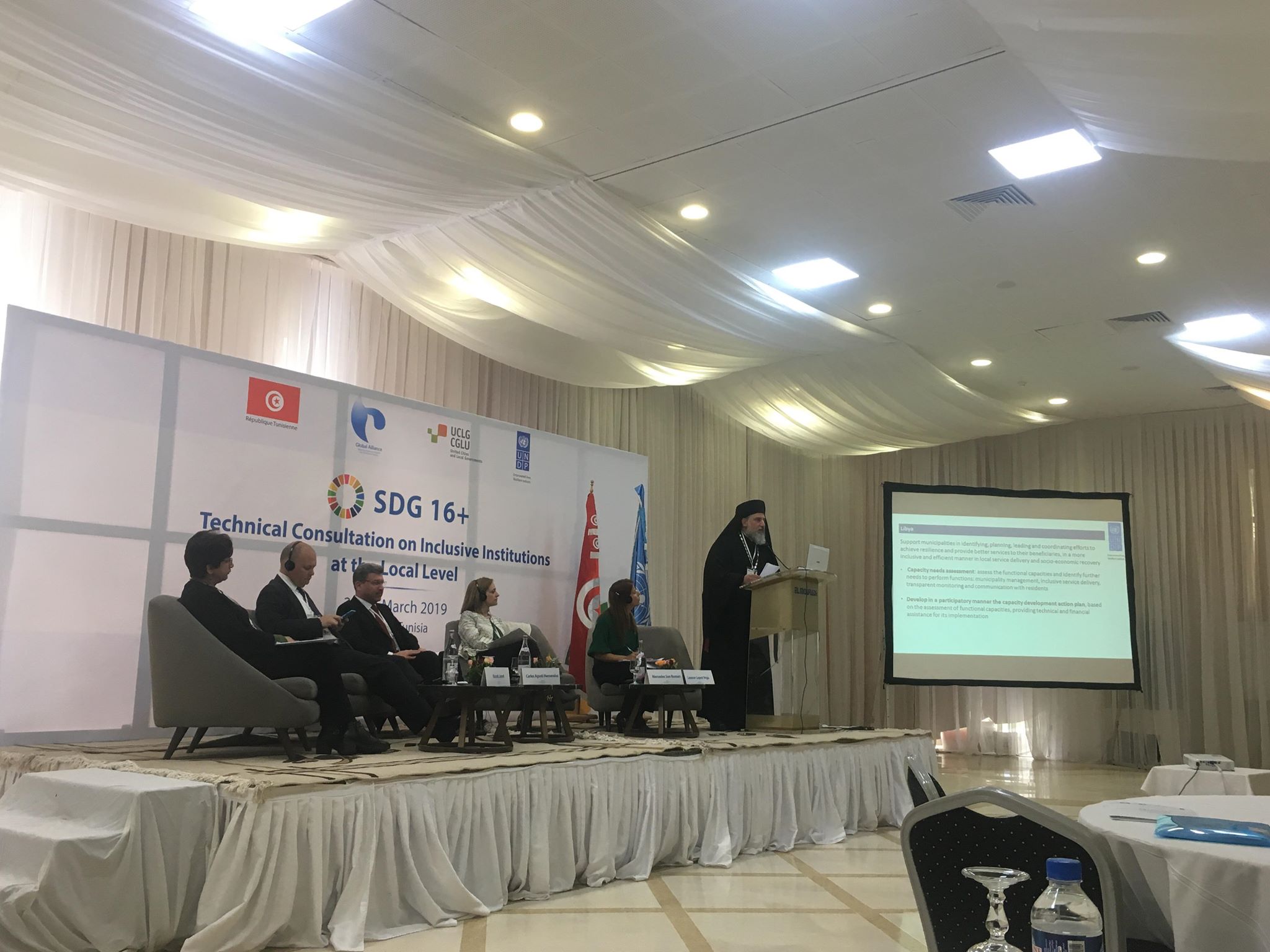 From 26-27 March, GFMD participated in a gathering of local and national governments along with  civil society actors in Tunis. Co-hosted by the United Nations Development Programme (UNDP) with Global Alliance, United Cities & Local Governments (UCLG), and the Government of Tunisia, the Technical Consultation was an opportunity to focus on the key messages related to the Inclusive Institutions dimension of Sustainable Development Goal 16 (SDG 16).

The two-day of consultation enabled the creation of a space to share progress and best practices regarding the reporting and the implementation of SDG 16 and its 12 targets – referred to as SDG 16+ – but also to facilitate greater collaboration between local and regional officials.

SDG 16+ Technical Consultations have been conducted previously in diverse regions regarding a number of issues that fall under the umbrella of the goal. These include the justice dimension in Sierra Leone (October 2018), inclusion and human rights in Cabo Verde (November 2018), and peace, human rights, and democracy in Mongolia (February 2019). The next one will take place in Panama and focus on multidimensional violence (April 2019). These consultations enable actors to better grasp global and regional trends and to track progress that has been made based on the SDG 16 indicators. The outcomes and the findings developed alongside these meeting will feed into the upcoming UN DESA Expert Group Meeting (EGM) on SDG 16, which will be held in Rome from 27 to 29 May. The EGM narrative will be then featured at the UN High-Level Political Forum (HLPF) in July.

During the consultation in Tunis, representatives often highlighted the difficulties of looking at the 2030 Agenda as a silo-based approach. Instead, the 17 goals of the agenda need to be articulated and interlinked with each other. Indeed, Victoria Jennett, a UNDP representative and the lead writer of the SDG16+ Global Alliance report, demonstrated that within the targets comprised in the overall UN Agenda, 36 of them contribute to creating a peaceful, accountable, and inclusive society and are therefore directly related to the SDG 16. In this sense, it is important to bear in mind that the SDGs should be also considered from a holistic perspective.

Divided into a panel presentation and roundtable discussion, the event focused on the inclusion of local institutions within the SDG 16+ review process. The first session started on the postulation that the inclusion of the local structure into the SDG reporting processes guarantees a coherence feeding into the national and the international levels.

Nevertheless, a report from UCLG, representing the interest of local and regional authorities, stressed that during the 2016-2018 period, less than a half (45%) of the 99 countries who reported voluntarily the steps they have been engaging in toward realising the SDGs – the Voluntary National Reviews (VNRs) – included local and regional governments in their consultation mechanisms. Maria Alejandra Rico, a member of UCLG Committee of Practices on Open Government, underscored why this is problematic. “Effective governance comes from the local authorities, as they have closer relations with citizens,” she said.

The panellists advocated for greater co-production and vertical coordination commitment from states towards local perspectives, seen as accelerators of the Agenda 2030. It also shed light on strategies that can be set in order to address the challenge of greater interaction – notably the vouch for access to information from local to national levels, but also to rely on the principle of leaving no one behind.

In response, the Open Government Partnership (OGP) initiative, represented at the consultation by regional actors, intervened as one of the potential strategic answers. The initiative calls for multi-stakeholder participation in order to make governments more inclusive, responsive, and accountable in their daily tasks. Furthermore, OGP is able to generate intermediary spaces by connecting authorities and citizens to one another.

Carles Agusti Hernandez, the director of open government in the Province of Barcelona, passionately argued for the need to improve the government models based on citizens’ knowledge by reaching them through traditional and online channels. According to Hernandez, the different levels of government hierarchy need to be more flexible, transparent, and inclusive as societies evolve faster than politics, and he cited the Diba Oberta project in Barcelona as an open data portal for the administration or participation platforms.

The panel presentation was followed by a roundtable discussion that gave participants the opportunity to reflect on ideas aiming to increase transparency and open government models at the local level. Dooren Grove, the head of Open Government in the Government of Scotland, added that it should be a prerequisite to have a trusted government and to strengthen co-creation with civil society actors.

The key messages retained from the Technical Consultation on SDG 16 emphasised a strong wish to promote dialogue, build common spaces, and present concrete results at diverse levels of power while working towards the development of the UN’s 2030 Sustainable Agenda.

The two days of presentations and discussions highlighted that SDG 16 needs to be translated to both the national and local levels by including diverse actors and sectors such as civil society, the private sector, and public authorities, which are each considered major actors for achieving sustainable development. The knowledge and information sharing as well as transparency are significant levers to realise SDG 16. Applying a synergetic approach for the initiatives launched is a condition to develop the SDGs, and more specifically, SDG 16+.